A WIP, IP; An Adaptation Diary

I wanted to document the process of writing an adaptation (whether it goes anywhere or not– [But uh, Guillermo del Toro, since you’re absolutely reading, let’s have coffee?]), with the thought that aspiring screenwriters may be curious of the work-in-progress, and of my (probably backwards and crippling) writing process.

Below, I’ve collected diary entries through this adaptation-in-progress, marking troublesome pages as I hit them, as I follow as strictly as I may to KONAMI‘s SILENT HILL 2: RESTLESS DREAMS.

This is a project I’ve wanted to do since I was 15 years old, so prepare yourself for much nerding;

I used to play about eight feet from the TV to avoid glare through the living room windows (yes, during the day. Also; Shut up). I’d be sat on the floor, or, if I was lucky, in a bean bag chair more often claimed by our little, stinky dog– this is in the time of wired-controllers, so distance from the console was a thing too– and between button-mashing monster-bludgeoning, and the frustrated back and forth of hunt&seek puzzle bullshit, I’d often pause to take notes…

Because I know this is a story people want to experience, but maybe they’re wusses– Or perhaps they can’t deal with the clunky tank controls of a survival horror for the near vintage Playstation 2/Xbox Original. Maybe they just don’t have the time for a 1.5 hour story stretched over 9-12 hours of gameplay…

That’s why adaptations are so necessary; Stories worth telling deserve multiple platforms, a wider audience. 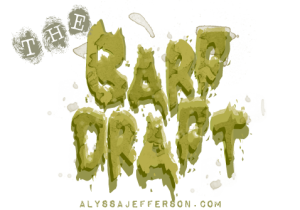 Page 3
Silent Hill 2 has a well-known intro. Most gamers remember it with a wry grin. Part cultural difference, part awkward voice acting, the cutscenes can be exposition-heavy. For example, you read an entire* letter within the first 5 minutes of gameplay.

In a video game,  you need some heavy story up front; This gives you drive,  gives you reason. It makes you not think to throw your protagonist down a well just to see what happens (though we’ve all tried).

In film, the opposite is true. You need mystery to get the audience invested in your character, so giving away the contents of the letter isn’t something I can do up front. I need that mystery. I need to hook you, to make you sit still for 1.5-2 hours.

Well, this is my tactic for a wider audience. When the first Silent Hill(2006) film was released, I heard two major complaints. First, Silent Hill fans raged that the adaptation was too far off from the story they loved– y’know, the usual complaint for an adaptation. The second, however, was that people who went to see it that hadn’t played the games, didn’t know what the fuck was going on. In sticking to the game’s storyline, they alienated non-gamers, but in venturing too far from the storyline, they offended loyal fans.

This is the tightrope-act of adaptations. I’m sure this will come up later.

* Okay, not “entire,” but enough so that it feels that way!

Page 5
In the game, creators made a point to make the walk to Silent Hill a long, monotonous one. This was not just to build anticipation, but to create a sense of isolation.

You can’t do that in a purely visual medium. Even as the player, directing the protagonist down the path made for you through the opaque fog (a paramount piece of Silent Hill), the repetitive sound of your footsteps, on and on for nearly 10 minutes grows tedious. It’s longer still before you face your first monster– but this was the intention.

I’ve always been a fan of horror (perhaps born with the inclination, as the product of criminal investigators/police), and I was enamored with Japanese horror very early on. The use of silence and anticipation to bring about dread and fear is so much more appealing to me than the more “fast-paced” jump-scares and spring-loaded cats American horror tends to feature.

Today, the challenge is to create that same experience (of isolation), a sense built on time, by cutting the time. Yeah, reread that as needed.

You can do this with strategic cuts, with light, with basic formatting cues… But that could be a boring read. Good thing this title is the perfect one for psychological twists and turns! The only limit is your freaky-deaky imagination! 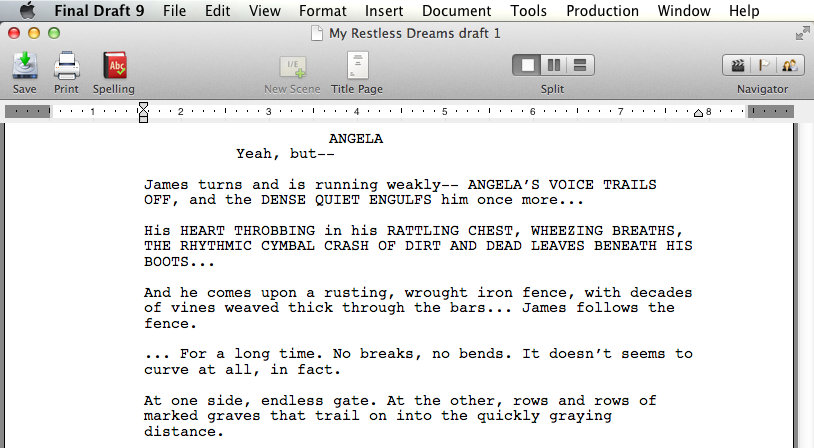 Yes, there are typos… It’s the Barf Draft; There will be many!

Page 8
You forget how much walking… just walking from point A to point B, how much time that can take in an open world sort of game. Silent Hill 2 relies so heavily on the players ability to follow a map– something that was far less impressive in the 90s, at the time of release…

Which brings me to Setting. Where in TIME are we? (Maps? Like, treasure?) Knowing the decade you’re in is vital to fully understand (and utilize) any technical limitations required. Cellphones, for example, seem to be quite a challenge for a lot of writers.

If James Sunderland could whip out a map app to get around town, he couldn’t get lost. If you’re not lost, you’re missing an important component of fear… And of course, you can phone for help with a cellphone. If you could phone for help, what danger are you really in? If there’s no potential to die/fail, there’s no reason to play (or watch).

There are simple ways around the Cellphone Dilemma. The battery is dead, you’ve got no reception, a slip of the hand and its screen is shattered, and so on, and yawn.

Today’s real challenge is how to create and extend a situation so that no one, that is, the protagonist nor the audience, ever has a moment to think of that  plot-hole. Gotta go all Penn&Teller, and razzle-dazzle them with one widely gesticulating hand as you’re palming the plot-hole with the other.

Page 12
I think the biggest challenge of this adaptation in particular, will be encapsulating this unique story into a stand-alone feature (as I briefly touched on before). James Sunderland’s Silent Hill isn’t the one you see in 2006’s SILENT HILL and 2012’s SILENT HILL: REVELATION 3D.

If you’ve seen the films, you’ve probably retained vague details of some bonkers, messy-haired hermit-lady raving about birthing a demon and being host to a horrific monster, or maybe something about a little girl who was burned alive for being a witch– You definitely remember barbed-wire tentacle-rape, and FOR SOME REASON, goddamn Pyramid Head rips some chick’s skin off and flings it at the protagonist like sopping laundry she’s to pin up to dry.

While Silent Hill, the place, is a character on its own, with a rich and tragic history to discover, James Sunderland’s experience just happens to occur here. He doesn’t care about cults, or curses. He’s got his own demons.

1 thought on “A WIP, IP; An Adaptation Diary”